A Gift for the Asking - Paperback

(No reviews yet) Write a Review 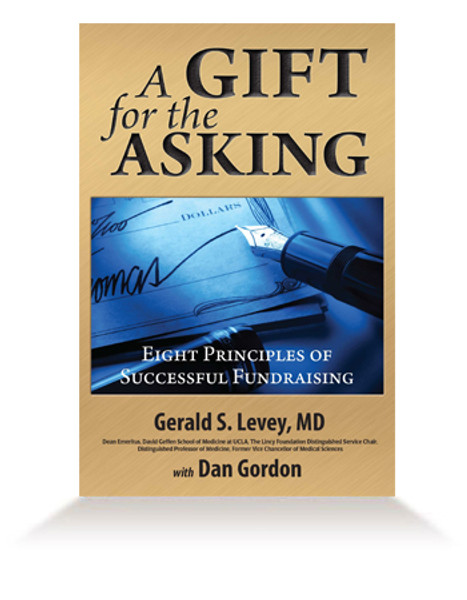 A Gift for the Asking - Paperback

Quantity Discounts are available for this book. Please refer to the chart below for pricing information.

Dr. Gerald Levey can “Talk the Talk and Walk the Walk.” At UCLA as the former dean of the David Geffen School of Medicine and the former vice chancellor of Medical Sciences, he led a team that raised $1.75 billion for the medical sciences.

Dr. Levey shares his principles of success and how an organization can learn and apply in their community what he did at UCLA. There are only three ways to improve the bottom line of a healthcare organization: raise revenues (harder in this environment), decrease expenses (also difficult, since that is what hospitals have been doing for years), or ask a friend of the institution to donate funds. His principles lay out, step by step, how to achieve the vision and goals of the institution.

Principle Two: Be thoroughly prepared when soliciting a donor.

Principle Three: Ask for what you need, not what you think the person can give.

Principle Four: Be patient, keep trying, and never give up.

Principle Five: Donors to academic medical centers expect a quid pro quo for their gifts–access to the best medical care.

Dr. Levey’s Principles can be adapted to any size organization or community. There are individuals in every community that have affluence. No matter what the size of your organization, if you have a sound fundraising plan, you can achieve great things. If your organization only raised 10 percent of what UCLA did, you would have $175 million. If you only raised 1 percent, you would have $17.5 million. What’s holding you back? Apply the lessons in this book and Go For It!

Dr. Gerald S. Levey, a nationally recognized leader in both academic medicine and private sector medical affairs, was vice chancellor Medical Sciences and dean of the David Geffen School of Medicine from 1994 to 2010. He is presently dean emeritus and the Lincy Foundation Distinguished Service Chair. He holds the academic rank of Distinguished Professor of Medicine in the Department of Medicine. As vice chancellor Medical Sciences at UCLA, he oversaw a diverse medical enterprise including the David Geffen School of Medicine at UCLA, the Ronald Reagan UCLA Medical Center, the Stewart and Lynda Resnick UCLA Neuropsychiatric Hospital, the Mattel Children’s Hospital, and Santa Monica/UCLA Medical Center and Orthopaedic Hospital.

Dr. Levey joined UCLA in September 1994, having previously served as senior vice president for Medical and Scientific Affairs at Merck & Co., one of the world’s leading pharmaceutical companies. He has held prominent leadership positions throughout his career, including serving as chair of the Department of Medicine at the University of Pittsburgh School of Medicine from 1979 to 1991. He is past president of the Association of Professors of Medicine, was a member of the Board of Governors of the American Board of Internal Medicine, and is a member of the Association of American Physicians. Dr. Levey is also a member of the medical honorary society Alpha Omega Alpha, and is a recipient of the Distinguished Alumnus Award from the University of Medicine and Dentistry of New Jersey. He received his Mastership from the American College of Physicians in 1997.

Dr. Levey is an internist and endocrinologist widely known for his research on the thyroid gland and heart. He was named a Howard Hughes Medical Institute Investigator while at the University of Miami from 1971 to 1979. Dr. Levey has developed a particular interest in issues of the nation’s physician supply and the role of generalist physicians, and served as co-chair of the National Study of Internal Medicine Manpower from 1981 to 1991. He has authored or co-authored 210 scientific publications. Among his honors: He is the recipient of the UCLA Medal (the highest award given by UCLA); The Award of Extraordinary Merit, UCLA Medical Alumni Association; Charles Drew University of Medicine and Science Board Medal of Honor; The American Jewish Committee Distinguished Leadership Award; Gerald S. Levey Surgical Award, UCLA Department of Surgery; Visionary Award, UCLA Department of Neurosurgery; The Golden Apple Award, David Geffen School of Medicine Class of 2010; Barbara A. Levey, MD and Gerald S. Levey, MD Endowed Chair donated by Robert A. (Bobby) and Nina Kotick; and Gerald S. Levey, MD Endowed Chair, donated by Shirley and Ralph Shapiro. Dr. Levey is the author of the book Never Be Afraid to Do the Right Thing: A Leadership Guide in an Age of Change and Challenge published in August 2011.

Dan Gordon is an award-winning writer and editor whose work has chronicled some of the most important trends in healthcare, biomedical research, business, and education. A graduate of UCLA, he is currently a contributing editor at UCLA Magazine and has written extensively about the societal implications of such pivotal issues as stem cell research, nanotechnology, artificial intelligence, and solar power. His work has appeared in the Los Angeles Times, Men’s Fitness, and Glamour magazine, as well as numerous other online and print publications. He lives with his family in Agoura Hills, CA.

"With the expertise of a seasoned clinician, the analysis of a dedicated researcher and the bedside manner of a compassionate physician, Jerry Levey shares his remarkable experiences, insights, and lessons learned on the path to fundraising success.  A GIFT for the ASKING is a great primer for anyone looking to demystify the development process and unlock the secrets of impactful and rewarding leadership."
Rhea Turteltaub, Vice Chancellor, External Affairs, UCLA, Los Angeles, California

"Dr. Levey, in A GIFT for the ASKING, underscores many fundraising techniques that are of tremendous importance to a fundraiser. It is impressive that someone appointed as the vice chancellor of Medical Sciences and dean of the David Geffen School of Medicine at UCLA not only learned about successful fundraising techniques, but embraced and implemented appropriate cultivation and solicitation tools, Case Statement preparation, and donor stewardship processes. His book can be used for learning as well as affirmation of doing it the right way."
Karen J. Johnson, CFRE, EdD, President, Rocky Mountain Adventist Healthcare Foundation, Greenwood Village, Colorado

"As executive director for Medical Sciences Development, I had an amazing opportunity to work side by side with Dr. Levey for more than eleven years and watch him, firsthand, implement his eight principles of fundraising as outlined in A GIFT for the ASKING. For those of you who aspire to be leaders in academic medicine or in development this is your opportunity to learn from one of the very best.

Dr. Levey demonstrates how an intuitive understanding of an organization’s strengths, challenges, and opportunities; the ability to connect with members of the donor community on a professional and personal level; and the leadership’s structure of a creative and compelling vision for the future, can combine to inspire unprecedented levels of philanthropic support for an organization."
Nancy Sacks, Executive Vice President & Chief Development Officer, The Jewish Federation of Greater Los Angeles, Los Angeles, California

(No reviews yet) Write a Review

A Gift for the Asking - Hardcover

A Gift for the Asking - Hardcover

Why Hospitals Should Fly - Paperback

If Disney Ran Your Hospital - Paperback

Courage to Be First - Hardcover

Charting the Course & Why Hospitals Should Fly - 2-Book Set - Paperback

Charting the Course & Why Hospitals Should Fly - 2-Book Set - Hardcover